Finally, I included the source code for "Kiloblaster" and "Xargon." My intent is to allow people to use this in any way they choose, including to create a commercial product. The two limitations are: 1) They can't release a game that in any way resembles either of my games and, 2) They can't use it for anything pornographic, illegal or in any way immoral. Those are my only requirements.

New-age Galaxian. Move along in space in your fighter and shoot anything that moves, while collecting power-ups, such as fruits (fruits in space?) and thing, which looks like red circle with yellow "T" inside.

This game has joystick, Sound Blaster and VGA support. 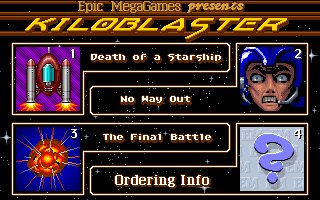