Legend of the Ancient Dragon

You can play Legend of the Ancient Dragon on this website so you don't need to download and install the game on your computer. We recommend to use Google Chrome when playing DOS games online.

This is a Japanese-style party-based role-playing game created in South Korea. Set in a Western medieval fantasy style world, it deals with a story of a prince set on a quest to defeat a dragon that once threatened the land, then was sealed away but is now let loose again.

The developer, Mirinae Software, intended to market Ancient Dragon to the English-speaking audience and released a demo for this purpose, but the text remains in Korean so it's hard to tell what's going on if you don't read the language. The demo contains a portion of the full game, with a town and some dungeon areas. The full game has an English version. 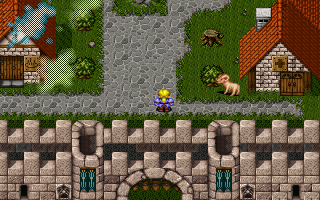