You can play Legends of Valour on this website so you don't need to download and install the game on your computer. We recommend to use Google Chrome when playing DOS games online.

The playable demo is limited to certain parts of the city only, without any magic or combat. However at nighttime you may run into monsters, but not fight them.

Legends of Valour is a pioneering action RPG that, along with Ultima Underworld, inspired the authors of The Elder Scrolls: Arena. Legends of Valour runs on an engine similar to that of Wolfenstein 3D or Thor's Hammer and creates a living world populated by dozens of characters the player can interact with. It is not as vast as [i}Arena and there is only one city to explore, but it is large enough and has vast dungeons beneath.

Players familiar with the Elder Scrolls games will feel at home in the world of Legends of Valour, and indeed some concepts shared between the games are more sophisticated in Legends. For example, you may not only ask NPCs about their name and job (the basics of NPC interaction in RPGs), but also where they're going and their religion. The player character needs to eat and sleep to remain healthy, making more use of the taverns and inns than in [i}Elder Scrolls games where food and drink are little more than a gimmick.

If anything, this game is an interesting piece of video gaming history because it paved the way for the Elder Scrolls series and thus helped shaped the CRPG genre. 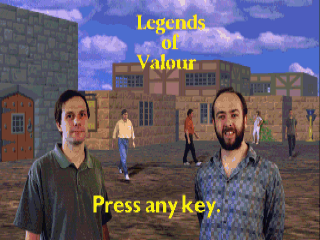