Lords of Midnight: The Citadel

You can play Lords of Midnight: The Citadel on this website so you don't need to download and install the game on your computer. We recommend to use Google Chrome when playing DOS games online.

The playable demo allows the player to explore the Blood March region as Amarin Starchaser.

The non-playable demo shows Amarin flying around on a dragon.

Lords of Midnight: The Citadel is a deep fantasy role-playing/strategy game with beautiful voxel and polygon-based visuals, and an epic story comparable with J.R.R. Tolkien's Lord of the Rings. It is a sequel to the original Lords of Midnight title, originally released for ZX Spectrum in 1984.

The game world is very complex, and so are the controls and mechanics of the game. The player can control a single character but also has access to allied armies and their leaders, who can be either controlled directly or issued orders to be carried out by the AI. The Blood March region is vast and full of detail to be envied by many other RPG games of the time, with real time day/night cycle and character interaction. 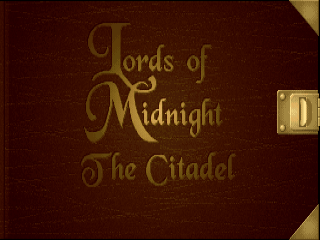