You can play Magics I on this website so you don't need to download and install the game on your computer. We recommend to use Google Chrome when playing DOS games online.

This is a collection of three arcade games: a Columns variant, a Snake variant, and an attempt to combine the two into a hybrid snake / tile-matching game. Each of these has several difficulty settings and / or playing modes.

Out of these, only the columns variant (called Magics-Dia) is really worth playing, as both snake games appear to suffer from clunky controls, and there are better games of this type for DOS around anyway.

Magics I was sold as shareware, with the unregistered version limited to the first three levels in each snake game, and columns can only be played up to a maximum score of 3,000 points. Registered users would also receive level editors for the snake games. 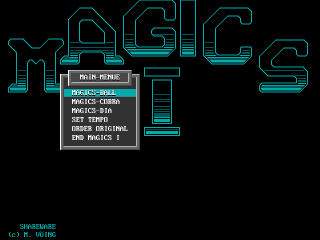