You can play Major Stryker on this website so you don't need to download and install the game on your computer. We recommend to use Google Chrome when playing DOS games online.

Apogee Software generously released this game as freeware in March 2006.

NOTE: This game uses a DOS installer. For details on how to install a game in DOSBox, please check this tutorial.

In the not-so-distant future the calamity of World War III led to eventual world peace. But it did not last...

Earth was invaded by alien marauders--the Kretons. Earth's united military force, still depleted after the mighty onslaught of WWIII, was not nearly sufficient to repel the numerous Kreton attacks.

It was discovered that the Kretons had used a wormhole to invade our region of space from their home worlds. And with that knowledge Earth called into action Major Harrison Stryker, hero of WWIII, to travel back through the wormhole and destroy the Kreton's home world headquarters.

With almost no chance of success, you accept the mission...

Major Stryker is the first Apogee game with "triple-parallax scrolling", adding to the illusion of depth and danger. Your mission is to pilot a high-powered, armored space ship through dozens of stunning scenarios, such as space stations, lava caves and alien cities.

The cheats here are a bit more complicated than in other games. There is a two step procedure to active the cheat mode. This cheat mode only works in the registered version. It does nothing in the shareware version.

During the game, hold down then [backspace] key, and then press
the [H] & [S] keys at the same time. When you are successful, you'll see a message that says "Cheat Mode On" (it is now). You can hit these three keys again to turn the cheat mode off.

Once activated, you can press these keys to activate various options. Please note that you must hold down the [tab] key first before pressing the others, or it won't work. 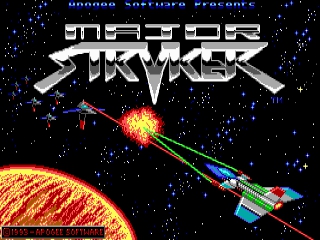