You can play Man Of War on this website so you don't need to download and install the game on your computer. We recommend to use Google Chrome when playing DOS games online.

Man Of War is a historical strategy game that recreates famous naval battles of the 18. and 19. centuries. Each scenario plays out over two phases: during each turn, the player first issues orders to every ship in the fleet, then a portion of the action is enacted in real time, with the player assuming the first-person perspective as the fleet's admiral aboard the flagship. In this mode, the player is free to walk around the deck and watch the battle. The ships are rendered in voxels, which contributes to rather slow frame rates in this mode, especially when big portions of the flagship are in view.

The playable demo contains one scenario and limited options, whereas the full game has twelve historically accurate scenarios, campaign mode with player progression through the ranks, multiplayer and a scenario editor. Additionally, certain battle events like a ship being sunk would be illustrated with animated cutscenes. 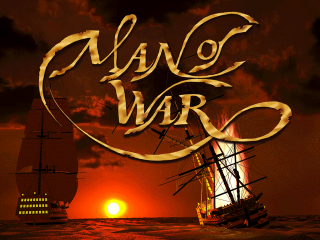