You can play Manchester United Premier League Champions on this website so you don't need to download and install the game on your computer. We recommend to use Google Chrome when playing DOS games online.

This is yet another bird's eye view, slightly cartoonish football (known as soccer in the New World) game in the same vein as Sensible Soccer. As the name suggests, it is based on the famous English club. Before each match, the player plans ahead the team's deployment and strategy, and can then either watch the computer play it out, or take over manual control.

The playable demo contains one match between Manchester United and Arsenal. The full game comes with options for custom matches, tournaments and entire seasons, with several of the leading English clubs available for play. 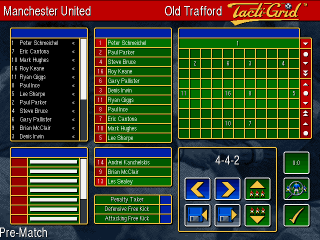