You can play Metal Rage on this website so you don't need to download and install the game on your computer. We recommend to use Google Chrome when playing DOS games online.

Drive the tank with arrow keys, press numbers 1 to 4 to select weapons (if available) and space bar to fire. To aim up, press Q, Z to aim down and A to centre your sights.

NOTE: Before playing, press F3 in the main menu to access game options, then press F6 until the detail is set to maximum.

In Metal Rage: Defender of the Earth, you pilot a futuristic tank in a fully 3D rendered, realistic looking environment. The story goes that in the early 21st century, humanity expands to colonise distant planets, with most of the Earth's military off to protect these operations. Faced with an unexpected alien invasion, humanity's home has to be protected with a single experimental tank that was left behind.

The tank can fire at both ground and air targets, and is equipped with several weapons, from the standard machine gun and AP cannon to missiles and mines. The ammo is limited though. You can switch between in-cockpit view and several external cameras by pressing Ctrl and Alt keys. 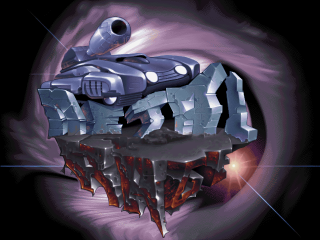