You can play Mick on this website so you don't need to download and install the game on your computer. We recommend to use Google Chrome when playing DOS games online.

Mick is a side-view fixed screen platform game that will likely remind you of Prince of Persia, but this one is more puzzle-oriented and aimed at children, so there's no combat, but still a lot of dungeon exploration to do.

Mick and Masha are children who loved to play on a grassy patch near the woods. Little did they know that deep in the forest lived a wicked sorceress who did not take kindly to trespassers. As Masha picked a magical flower, the sorceress appeared and transformed the girl into a small tree! Then she spirited Mick away to her dark castle and cast a spell on him as well, turning him into a ladybird. Now Mick is alone and needs to rescue himself and his friend.

The game has very simple controls. Once Mick regains his human form, you walk using the left and right arrow keys, while the up arrow will make him jump forward a little, or climb ladders. You will collect various items along the way, with the inventory split into potions and amulets. Press the Space bar to open the potions menu, and Enter to access the amulets.

Along the way, Mick will find various strange chimeric creatures in the castle, all transformed by the sorceress' spells. Using various potions that you find, you need to return these poor creatures to their original form, and in turn they will help you on your quest.

Because Mick was made primarily for kids, there is no way to lose the game. Mick can fall from any height without consequence, and other hazards like dropping into a pool of water will simply restart the current screen. You can also save and load the game at any time.

Mick was originally a commercial title, but in 2000s, DOKA Company made the full version available as a free download from their website. 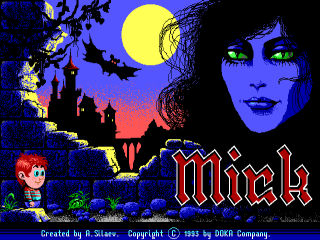