You can play Mimi & the Mites on this website so you don't need to download and install the game on your computer. We recommend to use Google Chrome when playing DOS games online.

Mimi & the Mites is a puzzle game with action and combat elements. Help Mimi find her way out of the dimension populated by mites - blue round creatures (apparently made of liquid or semi-liquid) - using her wits, various devices like teleporters and a hefty arsenal of weapons (but don't worry, mites can only be temporarily knocked out, and this game is entirely kid-friendly).

The level puzzles (each takes exactly one screen) may have very different conditions and elements for Mimi to use, but the objective is to always reach the exit while avoiding contact with any mites. In a way, this is an inversion of Lemmings where you need to avoid little creatures that ramble around, rather than steer them to the exit.

Mimi & the Mites was marketed as shareware. Somewhat confusingly, the unregistered version, which contains the first five puzzles, is called "Freeware" (likely in the original sense of the word as invented by Jim Knopf in 1983), and the registered version with 15 more levels is called "Shareware". 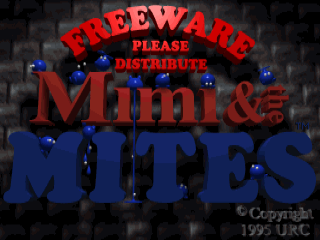