You can play Mission Pom-Baer on this website so you don't need to download and install the game on your computer. We recommend to use Google Chrome when playing DOS games online.

Mission Pom-Bär is a promotional platform game for a popular German snack brand, aimed mainly at kids. It features the eponymous Pom-Bear as the protagonist, who somewhat resembles the Disney version of Winnie the Pooh, but wears a crown for whichever reason. The story is simple: on a sunny day Pom-Bear was enjoying his snacks on a beach outing, and as he dozed off in the sun, the wicked but cartoonish wizard snatched Pom-Bear's stash of snacks and ran away. It's now up to you to help Pom-Bear in getting the stuff back.

At its core, Mission Pom-Bär is a hectic "jump-and-run" (as platform games are often referred to in Germany) where a lot depends on the player's ability to memorise hazards in the level and time their actions in a very precise manner. So the package does not lie that playing the game is good for dexterity and coordination. Hostile monsters are everywhere and will indeed try to get the better of Pom-Bear at every turn. You can collect blue and green orbs which act as ammo: red projectiles fly in a straight line and the blue ones in a parabolic arc. But hitting many of the enemies will require a lot of precision as well, as they move quite fast. Some hazards like the rolling stone can only be avoided, or ignored if you got the invincibility pickup.

Mission Pom-Bär was sold on CDs for a pittance as the promotion for the snack brand. Similar to 2FAST4YOU, the CD included an installer and a program to copy it to several floppy disks. Users were encouraged to share this version among themselves at no cost, and the package explicitly states that the game is allowed to be distributed for free. This disk version contains no music (which played off the CD) and no CGI animations, which are larger than the game's data files and add nothing to the experience anyway. The game supports several languages including English. 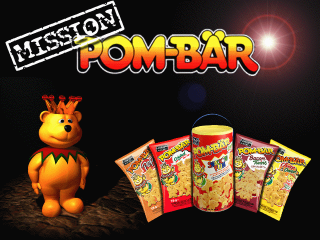