You can play Mr. Pibb - The 3D Interactive Game on this website so you don't need to download and install the game on your computer. We recommend to use Google Chrome when playing DOS games online.

Mr. Pibb is a non-violent first-person shooter aimed at kids that promotes the eponymous soft drink by The Coca-Cola Company. The game was created with the ACKNEX 3D Game Studio suite and its engine's capabilities are comparable to those of the famous Build engine by Ken Silverman. The art style is cartoonish and somewhat resembles The Simpsons.

The plot of Mr. Pibb puts the player in the shoes of a kid who goes back to school after holidays, only to discover that it's been taken over by a mad scientist bent on turning everyone into zombies (for purely scientific purposes of course!). To reverse this process, the player needs to "burp" an antidote at the zombies, which after a few hits turns them back into either school kids or teachers. There isn't much variety to this kind of combat, but the game makes up for this with a good deal of exploration and puzzles in roughly the same vein as many Build games. The player will find various tools to progress further into the school for a final showdown with the mad scientist in the basement.

Mr. Pibb was distributed as a free promotional game, with a digital copy available from BrandGames' website. 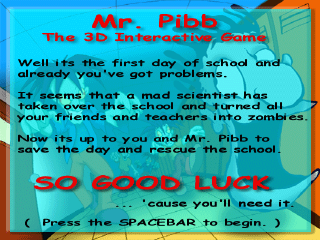