You can play Mysterious Song on this website so you don't need to download and install the game on your computer. We recommend to use Google Chrome when playing DOS games online.

If the gameplays slowly, press the right arrow key in the main menu to increase scrolling speed to 2 or more.

Mysterious Song is a console-style role-playing game with vaguely anime-esque art and turn-based combat. The story takes place in a fantasy kingdom that is suddenly overrun by monsters, and the main character, a young knight called Spear, is tasked with getting this back to normal - but not before having been contacted by a mysterious voice in his head...

Several more characters will join Spear on his quest. As in many other games of the genre, there is a world map which the player's party explored in real time, various towns, castles and other locations which may be entered, and combat encounters that are turn-based. Shops in towns sell useful items, inns allow to rest and/or save your game. Walking around the wilderness on the world map will soon result in random encounters with monsters; the farther from the starting location, the stronger the opposition. Grinding is essential for the characters to level up to be able to face more difficult foes later on.

Mysterious Song is a freeware game that comes with the complete source code in QuickBASIC. The game turned out so popular that it was later ported to consoles. 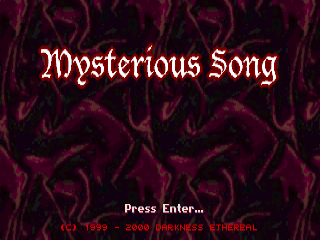