You can play Nahlakh on this website so you don't need to download and install the game on your computer. We recommend to use Google Chrome when playing DOS games online.

Nahlakh is a top-down fantasy role-playing game that looks similar to the Ultima series, but brings in many innovative ideas, resulting in somewhat different rules and playing mechanics.

The player controls a party of eight characters sent to a remote island which is ravaged by attacking kobolds. From here, you need to equip the characters in the nearby town, and start fighting back. Movement and combat are turn-based, as in many other similar games, while the skill system resembles that from The Elder Scrolls: Daggerfall: the more a skill is used, the more proficient the character becomes in it.

Nahlakh was originally sold as shareware: users could download and play the entire game, but were expected to register if they intended to keep it. Since then, author Tom Proudfoot has made the game freeware alongside the game extras which are downloadable from his site. 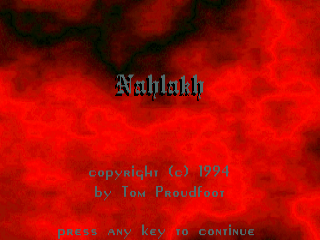