You can play Nebula Fighter on this website so you don't need to download and install the game on your computer. We recommend to use Google Chrome when playing DOS games online.

NOTE: The game has a native Windows version.

Nebula Fighter is a shareware side-scrolling shoot 'em up with pre-rendered graphics and fast, action-oriented gameplay.

Set somewhere after the year 2010, Nebula Fighter puts the player into the role of a lone ship pilot who needs to break through the defences of a space-faring alien race. The twist is that instead of an alien invasion scenario, the humans are actually the aggressors bent on conquering the alien homeworld.

Nebula Fighter features a variety of weapons, which can be powered up by picking upgrades during play. Each level ends with a battle against a unique boss. Once a boss is defeated, the player can pick up its weapon to use in the next level. 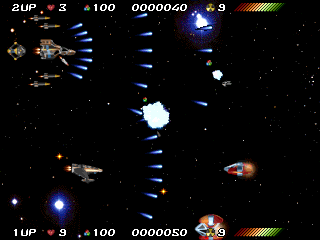