You can play Nippon Safes Inc. on this website so you don't need to download and install the game on your computer. We recommend to use Google Chrome when playing DOS games online.

Nippon Safes Inc. is a tongue-in-cheek, point-and-click adventure game from an Italian studio, featuring three different characters - a smart hi-tech safe cracker, a former boxer doing odd jobs, and an exotic dancer - who end up in prison in Tioko (obviously supposed to be Tokyo, Japan) for various misdeeds as the game starts, but are then set free to complete their separate story arcs, before getting to work together in the final chapter of the adventure.

The game is controlled entirely via mouse. The left mouse button directs the character, and the right button brings up a menu of available actions and an inventory (combined on a single panel). The only keyboard keys used are S and L for saving and loading the game, respectively, and the space bar, which, unexpectedly, exits back to DOS. The game supports several languages, including English, German and French in addition to the native Italian, selectable at the start.

Nippon Safes Inc. was originally a commercial product, but on 17 March 2021 it was officially made freeware by its authors. The game can be played in Windows using ScummVM (please see the links section below). 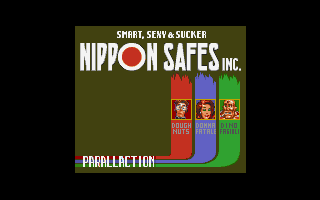