You can play Nitemare-3D on this website so you don't need to download and install the game on your computer. We recommend to use Google Chrome when playing DOS games online.

The evil Dr. Hamerstein has captures Hugo's fiancée, Penelope. In order to rescue her, Hugo needs to enter Dr. Hamerstein's house, defeat his minions and finally confront the mad scientist himself.

Nitemare-3D is very similar to Wolfenstein 3D, in terms of visuals, level design and gameplay. The player needs to collect weapons and ammo, solve puzzles, find keys to unlock new areas in a level, and fight various enemies. Much like in Wolfenstein 3D there are plentiful secret areas hidden behind false panels.

In addition to the weapons Hugo can use, there is an automap and even an enemy detector that will display all monsters in the vicinity in the map. However, unlike many other games in the genre, both the automap and the enemy detector require power to operate. The player needs to collect special items that will charge up either device.

The shareware version includes the entire first episode of the game, A House of Horrors. 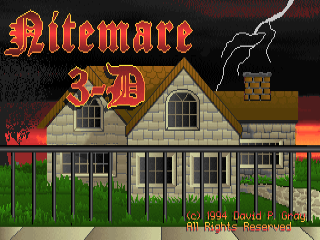