You can play Noid on this website so you don't need to download and install the game on your computer. We recommend to use Google Chrome when playing DOS games online.

Noid is a simple but colourful Arkanoid / Breakout clone that was distributed as a sample game for the DIV Games Studio development suite. It was originally included, complete with the source code, on the DIV Games Studio CD, and later available as a free download from the product's website.

Gameplay has no surprises here: steer the paddle (keyboard only) to direct the ball(s) to break bricks, pick up various bonuses that are marked by different letters and colours - it's up to the player to discover which does what. A nice touch is the animation of bricks that are knocked out by the ball, as they fall down the screen instead of simply disappearing.

The original Spanish version of Noid dates back to 1997, but the downloadable English version was made available in 2001. 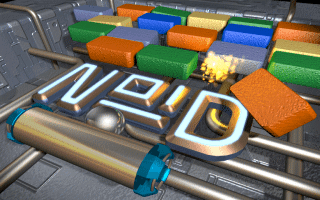