You can play Olmang Jolmang Paradise on this website so you don't need to download and install the game on your computer. We recommend to use Google Chrome when playing DOS games online.

Use the arrow keys to move the character, Ctrl to fire, and F10 to quit the level. During the intro sequence, press Esc to skip to the main menu.

Olmang Jolmang Paradise is a pseudo-3D behind-view arcade shooter in the same vein as Izmir, featuring an ensemble cast of characters from Family Production games, including Shakii the Wolf, Iron Blood and Pee & Gity Special. Accordingly, the levels (stages) in the game are themed after the respective titles these characters originally appeared in.

The plot doesn't take itself too seriously: the characters are angered at not receiving their payments from Family Production in time, and as they see the company president running away they chase him to get their money.

The demo allows to play three stages from the full game. 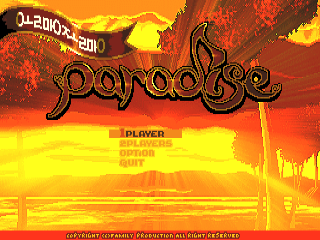