Open Quartz is a project aimed at creating a completely free, open source game on the Quake engine. Although abandoned before completion, what has been done allows to play multiplayer games against human opponents or bots, using maps bundled with the project or user levels.

The single-player component is limited to a few demo maps, but Open Quartz should allow to run many Quake total conversions, such as X-Men: The Ravages of Apocalypse. However, partial conversions and single-player user maps may possibly not work because of missing assets that were never added by the developers. (But a GPL licensed Ogre model replacement can be downloaded separately.)

In 2009-2010, a different developer picked up the project and released an updated version called Open Quartz 2. However, most updates affected the multiplayer part of the game, and the new data file format makes this version incompatible with older source ports. 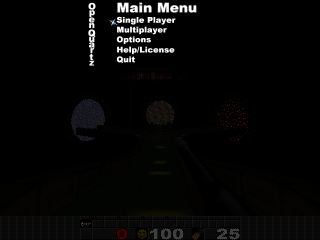