You can play Oxyd on this website so you don't need to download and install the game on your computer. We recommend to use Google Chrome when playing DOS games online.

Oxyd is an action-puzzle game based around the core concept of a tile-matching puzzle, but with many additional features. The player controls a black marble that rolls around levels (best controlled with a mouse), which is used to touch blocks that reveal a circle of a certain colour. The objective is to touch two same-coloured blocks in succession, so that they stay revealed. A level is completed as soon as there are no unrevealed blocks left.

This basic mechanic is further wrapped into layers of additional rules. The ball bounces around and may be destroyed by hazards. There are switches and laser beams, destructible obstacles, pitfalls and useful items, quicksand pits, hostile creatures/robots. etc. etc. Combinations of these extra elements allow to produce an almost infinite number of different puzzles. It takes to play the entire game to discover all its secrets.

Oxyd was originally marketed as shareware, with the somewhat unusual twist that users downloaded the whole game for free, but only the first 10 levels can be played without a codebook that had to be purchased separately from Dongleware. Later levels require the user to enter a code from the book in order to progress, similar to manual copy protection in some commercial games. In the early 2000s, a free Windows remake of Oxyd was produced by a different team with permission from the original developers. 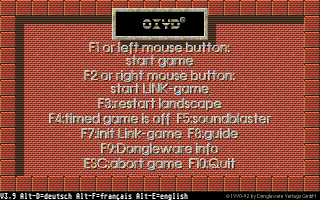