You can play PANGG! on this website so you don't need to download and install the game on your computer. We recommend to use Google Chrome when playing DOS games online.

PANGG! is a fan remake of (and homage to) Capcom's arcade game Pang (also known as Buster Bros.) for one or two players. You control a little dude at the bottom of the screen whose job is to burst bubbles that bounce around using a kind of a grappling hook that shoots upwards. Any bubble that touches the hook or its rope instantly splits into a pair of smaller bubbles, and the smallest ones disappear from the screen. The objective in each level is to clear the screen of all bubbles before the time runs out. Careful - if a bubble touches the player it's instant level restart. Some bubbles drop bonuses when burst, which the player is advised to pick up.

PANGG! was developed by a Spanish fan of the original game, and is entirely in Spanish but knowledge of the language is not required to enjoy it. There are only PC speaker sound effects and no music in this game. PANGG! was released as freeware. 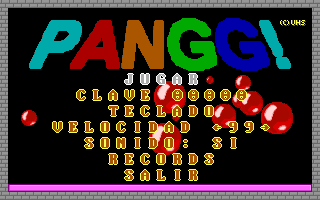