You can play Paranoid on this website so you don't need to download and install the game on your computer. We recommend to use Google Chrome when playing DOS games online.

Paranoid is an Arkanoid/Breakout clone that sticks fairly close to the original playing formula. The player controls a horizontal paddle at the bottom of the screen, which is used to indirectly steer a ball against rows of "bricks" at the top, which break upon contact with the ball. Some bricks release bonuses which slowly fall down, and, if caught by the paddle, provide an advantage to the player, such as an increased paddle size. Should the ball fall off the bottom of the screen, this will subtract a "life" point from the player.

The paddle in Paranoid is controlled by keyboard only, with the default keys being left and right Shift for paddle movement, and Space bar for releasing the ball. It is possible to remap keys but this requires typing keyboard scancodes in the command line.

Paranoid was sold as shareware. 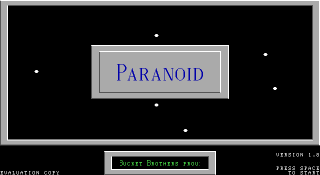