This is a liberated game: it was originally shareware, but in 2001 authors Kari Luojus and Niko Nevatie released the full version and the source code as freeware.

PaybackTime 2 is a shareware turn-based tactics game for up to four players. Its visual style and combat mechanics are heavily inspired by X-COM: UFO Defense, but the game is about a fighting tournament rather than an alien invasion.

The player must assemble and equip a team of warriors who will participate in fights with other teams on a variety of battlefields. The winning team earns credits and valuable experience, growing stronger with each victory.

The main focus of the game is on multiplayer battles, but single-player games against up to three AI opponents are also supported.

The game allows for considerable customization. In addition to the team editor, it includes a map editor, a weapon editor and an item editor. 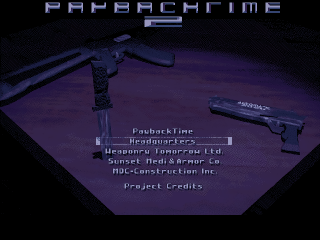