You can play Peach the Lobster on this website so you don't need to download and install the game on your computer. We recommend to use Google Chrome when playing DOS games online.

Peach the Lobster is a sample game that was included with the demo of Recreational Software Designs' Game-Maker. It showcases and describes various features of the development tool, but also contains a complete playable game featuring an anthropomorphic lobster named Peach fighting various hostile creatures (mostly ducks).

Peach can run and jump, and throw an unlimited supply of lobster claws at enemies. Touching or bumping into any hostile creature will slowly damage Peach, but there is no visible health meter so it's hard to tell how much hit points you have at any time. There are 14 levels split into several themes. 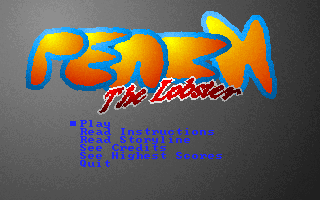