You can play Pebbles on this website so you don't need to download and install the game on your computer. We recommend to use Google Chrome when playing DOS games online.

Pebbles is a simple Boulder Dash clone with high-resolution graphics and eight levels. The original download apparently included no readme, but the game was created by Ethan Stone / Esc Programs, the developer probably better known for the unofficial version of Monopoly.

Pebbles was released as freeware, and originally its source code was also available for download from the developer's site. However, the code has apparently been lost since. 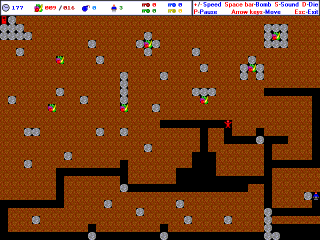