You can play Pee & Gity Special on this website so you don't need to download and install the game on your computer. We recommend to use Google Chrome when playing DOS games online.

Pee & Gity Special is a side-scrolling beat 'em up game for one or two players similar to Double Dragon. The story takes place in a fantasy land inhabited by anthropomorphic creatures, which is threatened by a demonic presence and its henchmen. Two brave heroes, the Siamese cat Pee and laboratory frog Gity, are chosen to oppose this menace, and in the process, are going kick a lot of animal tail (and some magical creatures too).

The game art is drawn in a very appealing style with colourful images resembling 90s cartoon shows. Each of the characters can punch or kick by combining the attack button press with directional arrows, as well as perform special attacks. Stages can be completed by one or two players using the same keyboard. 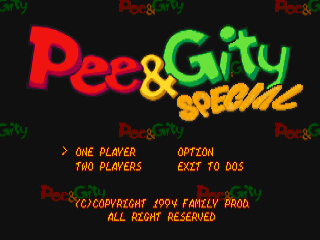