DOSBox cycles need to be set to around 15000 for the game to run at acceptable speed.

The file Pf_fixed.zip includes a patch for Pentium computers.

Pekka Kana ("Pekka the Rooster" in English) is a Finnish platform game about the eponymous chicken (rooster) on his quest for revenge after having spent time in a mental hospital as a result of his unsuccessful political campaigning.

The game was supposed to have four episodes but only the one-episode demo version exists. 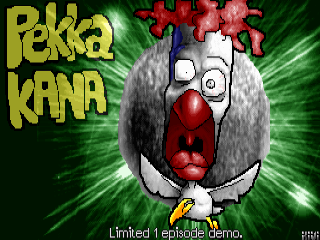