You can play Rick Dangerous II on this website so you don't need to download and install the game on your computer. We recommend to use Google Chrome when playing DOS games online.

The control keys may be configured at the start of the demo. To use AdLib sound, the SOUND.COM driver is required (please see the links section below).

Rick Dangerous II is the second game featuring the eponymous protagonist. Originally an Indiana Jones like character fighting the Nazis, Rick now finds himself in the post-war London facing an alien invasion, and dons a Superman style costume to defeat this threat.

The game is a platformer/shooter with heavy arcade elements, forcing the player to rely on precise timing to avoid traps and defeat enemies. Rick has three types of attack: punch (press the fire button + directional keys), laser bolts (press up + space bar) and bombs (press down + space bar). The ammo for the latter two is limited but may be replenished throughout the levels. 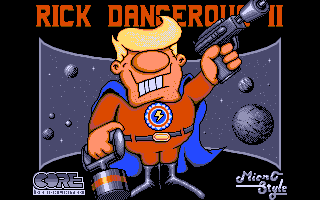