Rings of the Magi

Chosen by Computer Gaming World as the best shareware puzzle game of 1996, Rings of the Magi has been called "the most addictive game in shareware." The mystics of Ac'Rained have crafted their rings to prevent the life force of their world from draining away, but now their secret art is in danger of being lost. As their apprentice, you are called upon to learn and harness the power of the rings. Find out why this wonderful strategy game was awarded a five-star rating from Ziff-Davis Interactive, a distinction achieved by less than 3% of all shareware games. It features riveting game play and rendered 3D graphics. 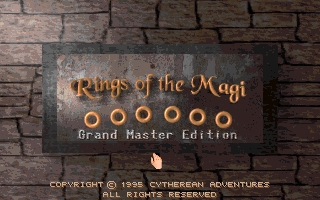