You can play Robot Redemption on this website so you don't need to download and install the game on your computer. We recommend to use Google Chrome when playing DOS games online.

Robot Redemption is a free, open source game based on the code of id Software's Hovertank 3D - a technological precursor to the Catacombs 3D series which includes The Catacomb Abyss.

In Robot Redemption, you are Mash Hardrock, a space pilot who happens to own a hyperdrive-carrying ship that can instantly warp in and out of dangerous areas. Hired by the Jupiter Moon Mining Corporation, your mission is to rescue stranded robots from their facilities on the moons of Jupiter. Once you land, scout the area in the buggy provided by the Corporation, and pick up all the robots you can find (the on-board radar should come in handy). Watch out - hostile alien lifeforms and rampant security bots stand in the way, but that's what the mining laser is for! There's a countdown timer ticking so make sure you save everyone and get out as fast as possible.

Robot Redemption is freeware. The engine is licensed under the GNU General Public License, version 2, the game data is under the Creative Commons Attribution-NonCommercial-ShareAlike 4.0 International license. Apart from the DOS version, the author produced accurate recreations for Windows and Linux with the Unity engine. 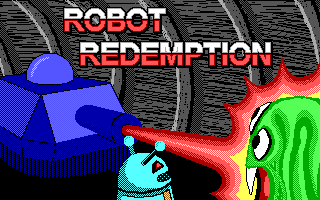