You can play Rodge Rock in Retro Active on this website so you don't need to download and install the game on your computer. We recommend to use Google Chrome when playing DOS games online.

Rodge Rock is a nice but fairly obscure shareware platform game from Australia, which has some similarity to both the first Duke Nukem game and Halloween Harry a.k.a. Alien Carnage. The titular character is literally a cyber-punk equipped with a gun and "Retro boots" (as the manual calls them) which allow Rodge to fly. He is tasked with cleaning the "underground worlds of Earth" from "alien scum" (sound familiar?). So much for the story.

The game itself is a fairly frantic experience as you steer Rodge in his flying boots around the levels, while blasting away hostile creatures that come at him, mostly in a flying manner. In fact, Rodge Rock plays a lot more like a shoot-'em-up than a straightforward platfromer, even one with a jetpack like Alien Carnage (which, incidentally, was also developed in Australia). One interesting touch is that the game does not only render the floors and ceilings in an isometric view (compare this to Prince of Persia or Commander Keen IV), but actually changes the perspective depending on the position of the main character, using some multiple-layer effect.

Rodge Rock was sold as shareware, with 10 levels in the full game and only one in the unregistered version. Unfortunately, it seems like the author himself no longer has the full version or the source code. 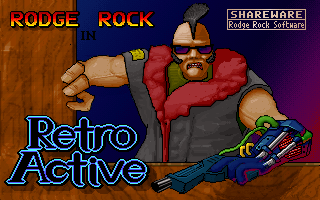