Scorcher is a futuristic racing game in which the player assumes the role of a Vexoid -- half-human, half-machine racer (essentially, a human driver fused with a futuristic bike), competing against other Vexoid contestants on dangerous tracks full of obstacles and pitfalls.

Compared to typical car racing games, Scorcher leans heavily towards arcade action, There are powerups that you can collect along the way that will help win the race, and the player's ability to jump over obstacles is often needed to negotiate the tracks.

The demo contains two tracks (one easy, one hard) from a total of six in the full game, and only the Time Attack game mode is available. You can switch to high resolution and hi-colour mode, but no sound effects or music are present in the demo. 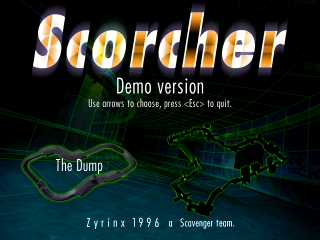