Sentinel is a small console/arcade style action platform game with a futuristic theme. The author Leonard Yeo Khee Teck wrote it as practice of coding skills and as a demo for the work portfolio. It appears that this demo was never developed into a full-fledged game, but it is playable and feature-complete as it is.

The player controls what appears to be a cyborg or robot, possibly called Perseus, who fights endless waves of Alien-esque creatures and other monstrosities while navigating a futuristic tech base. Ammo is limited so look for powerups lying around. There are no sound effects or music, but in some situations the player characters talks via speech balloons, which is a nice touch.

According to the readme, the author released the demo into public domain. It can be copied freely, but may not be sold or used commercially. 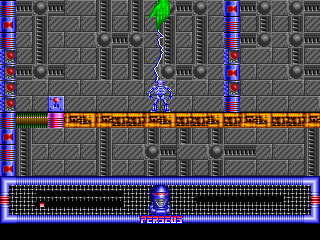