You can play Sentoo on this website so you don't need to download and install the game on your computer. We recommend to use Google Chrome when playing DOS games online.

Sentō (which means, among other things, 'Fight' or 'Batttle' in Japanese) is a versus fighting game with fully 3D rendered characters and environments, somewhat similar to FX Fighter. There are only four characters in this game, with two available in the shareware version. The sketchy background story is that a war between two Sentoo Masters is raging for eons, pitting mighty battle-lords against each other in a contest of spiritual and physical strength. 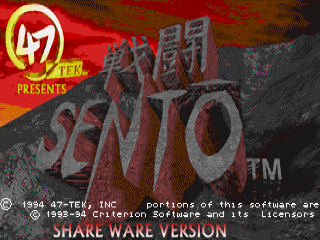