DOSBox needs to be configured to use at least 24 MiB of RAM to run this game.

Shaw is a boy who fell asleep and found himself in a nightmare. To find his way out, he needs to explore a bizarre world filled with all sorts of weird and unfriendly creatures.

Shaw's Nightmare is a first-person shooter game inspired by DOOM and other classic titles in the genre. It runs on Ken Silverman's Build engine which also powers such games as Duke Nukem 3D and Shadow Warrior.

During play, just type the codes within the keyboard. You do not need to press ENTER after the code. 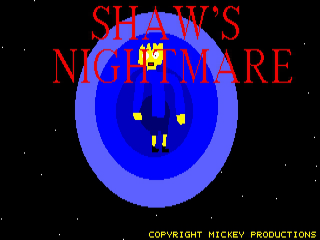