You can play SKAPHANDER on this website so you don't need to download and install the game on your computer. We recommend to use Google Chrome when playing DOS games online.

The game recognises both keyboard and mouse input. If you don't want to use the mouse, be sure to centre it, especially if playing in the browser, so that it does not cause the character to move.

SKAPHANDER is a first-person shooter game where you fight viruses and bugs in cyberspace. Created in Germany in a time when government authorities imposed bans on violent video games, SKAPHANDER apparently tried to keep the first-person action/combat while doing away with the violence part, which resulted in the player shooting at abstract shapes.

The game was made with the German ACKNEX/CubicSpace toolkit (later known as 3D GameStudio) which allowed users to create royalty-free DOOM-like 2.5D first-person titles. As this was the first commercial ACKNEX game, the one-level demo of SKAPHANDER was also distributed by ACKNEX developers to show off the capabilities of their product. 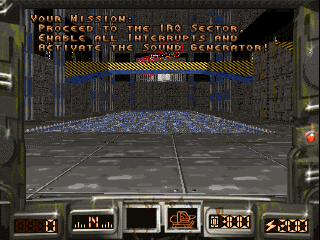