You can play Sokowahn Pro on this website so you don't need to download and install the game on your computer. We recommend to use Google Chrome when playing DOS games online.

Sokowahn Pro is a Soko-Ban variant with classic rules and simple, colourful high-resolution graphics. Unlike many other games of this kind, all puzzles are completely original, without copying either Soko-Ban or other games, and are sorted by increasing difficulty. However, levels can be played in any order.

The game records the time spent on solving a puzzle as well as the number of moves it took the player to do so. The entire playing session may be recorded as a "replay", which can be then shared with other users. There is also a built-in level editor, and a built-in CD player (but no in-game music).

The developer has discontinued Sokowahn Pro and no longer sells it, but the levels are included with other Soko-Ban-like products by the same team.

The game is entirely in German, but an English version of the manual is included in the package. The registered version was available in English. Generally, knowledge of German is not required to play. 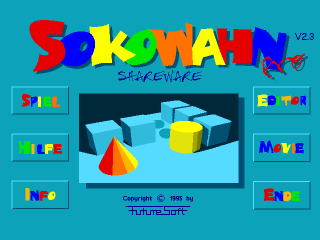