You can play Sopwith on this website so you don't need to download and install the game on your computer. We recommend to use Google Chrome when playing DOS games online.

Press Ctrl+Break to quit the game.

Sopwith is a side-scrolling arcade shooter where you fly a biplane (the eponymous Sopwith Camel) and try to wreak havoc on the opponent's bases, ground and air forces. It was originally written by David L. Clark as a network test for the proprietary networking system by BMB Compuscience, and hence has a multiplayer mode in addition to playing against the computer. However, the popularity of Sopwith swiftly overtook its original purpose, turning it into one of the "cult classic" 80s games for the IBM PC.

While this original version of Sopwith is playable, you will notice sprite flicker in DOSBox, and it is generally recommended to play the much updated Sopwith (The Author's Edition) that was released by the original author in the early 2000s.

Dave Clark also made the source code of the original Sopwith publicly available, but make sure you read the license agreement carefully. 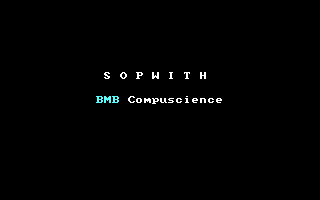