The latest version 2.31 uses a Windows installer that may not work on modern systems - consider using Universal Extractor or winevdm to extract the files (please see the links section below).

This is a historical combat flight simulation that covers both sides of the Spanish Civil War (1936-1939), made with Domark Software's Flight Sim Toolkit. Fly various period-accurate airplanes as Republican or Nationalist pilots on different missions spanning two operational theatres: Valencia region and Ebro delta. The game has 20 scenarios and over a dozen aircraft types.

The simulator was licensed as shareware by its author, but only to retain his rights over it. No registration is required and there are no limitations in the freely distributable version.

The game may be a bit tricky to run. The latest version comes with a Windows-based launcher that contains mission briefings, but it expects the supplied DOS binary to run natively which it won't do on modern Windows versions. You can try replacing FLY.EXE with a Windows version built from source (see the FST DataPort page). In DOSBox, use the supplied BAT files to launch individual missions. 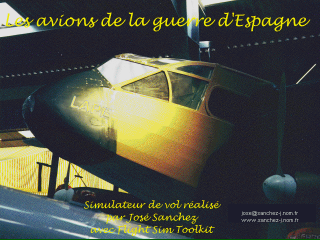