You can play Spectre-VR on this website so you don't need to download and install the game on your computer. We recommend to use Google Chrome when playing DOS games online.

Spectre-VR is a rather simple 3D rendered tank driving game where you need to collect flags and shoot enemies on the playing field. It is the sequel to an earlier game simply called Spectre with the same premise, which was originally released for Macintosh computers. Spectre-VR adds different tank types, customisable tanks and other enhancements, and improves game visuals.

A modern version of Spectre is available from Apple Store. 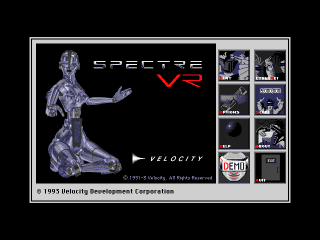