You can play Spectre on this website so you don't need to download and install the game on your computer. We recommend to use Google Chrome when playing DOS games online.

Spectre is an early true 3D first-person shooter game where you drive a tank in a "cyberspace" environment as it was conceived of in the late 80s - early 90s under such influences as the movie Tron. In the single-player mode, the objective is to collect all flags in each level while avoiding or destroying AI-controlled tanks. Network play offers three modes: Arena is free-for-all deathmatch, Flag Rally is capture the flag, and Base Raid is two teams agaist one another.

The demo of Spectre only includes one single-player level. The game was later updated and re-released as Spectre-VR. 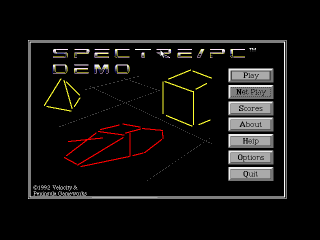