You can play Spin on this website so you don't need to download and install the game on your computer. We recommend to use Google Chrome when playing DOS games online.

Spin (also spelled SPIN) is a freeware overhead view space shooter in the vein of the classic Asteroids with pseudo-isometric sprites, which is surprisingly fun to play. You are a space cop of sorts, whose task is to hunt down and arrest space pirates, all the while trying to protect defenceless freighters from pirate attacks.

Gameplay generally consists of flying around and trying to shoot down hostile ships. If successful, their pilots bail out in capsules that usually don't appear right next to the wreck (thanks to "warp technology"), so you need to get to such capsule and pick it up to arrest the bad guys. Experience points are awarded for destroyed ships and other targets (e.g. asteroids) and caught pirates, and the player character gradually levels up.

To help navigate the vastness of space, there are long- and short-range radars at the player's disposal, displayed in the top-left corner of the screen. Everything is colour coded and easy to spot. The ship's speed may be adjusted at any time, as it is easier to manoeuvre during dogfights at lower speed, but the player can also travel at warp speed to faster reach remote areas, albeit at the cost of increased energy spending. 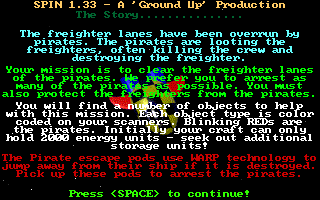