Apogee Software generously released this game as freeware on June 22, 2005.

NOTE: This game uses a Windows installer. The installer file can also be opened as a ZIP archive.

Make sure to patch the game to v1.1 (sgr11pt.zip) after installation.

Raptor fans look-out! The best PC shooter is here! The graphics, music and sound effects in Stargunner are simply brilliant. This game sets a new standard is PC shooter graphics and a level of detail and animation that's not been seen on the PC before. Okay, this is all sounding like too much hype but when you've got the best what else can you say. ;)

The shareware version has 6 blast-a-thon levels, with space levels, land-based levels and finally an underwater excursion. The full game has 34 levels, more weapons, four cinematics and all the good stuff.

In the far distant future, an epic war for survival takes place...

Deep within the Andromeda galaxy, the people of Zile grow restless--and greedy. The Zilions secretly prepare for a massive strike against the nearby planet Ytima. Fearing such an attack the Ytimians train an elite squad of "Stargunners." Their mission: To strike the planet Zile first, and cripple the Zilions three strongholds, where the Zilion war fleets await the launch order. If the Stargunners can surprise the Zilions on their own planet, and destroy most of their fleet, then good will triumph at least one more time. 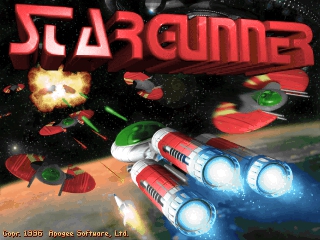