You can play Station Escape on this website so you don't need to download and install the game on your computer. We recommend to use Google Chrome when playing DOS games online.

Station Escape is a first person adventure / shooter game that was created to demonstrate the capabilities of Lary Myers' ACK-3D engine, which is essentially similar to the Wolfenstein 3-D engine, but has some advanced features.

As the title suggests, the story takes place on a space station which the player must escape before the time runs out. There is one shuttle remaining after the bulk of the crew evacuated, but some parts are missing and need to be found throughout the station to repair it. Unfortunately, the stations hallways are crawling with hostile astronauts that try to stop the player at every turn. There are two hours before the station's orbit decays.

Station Escape was released as freeware along its entire source code. 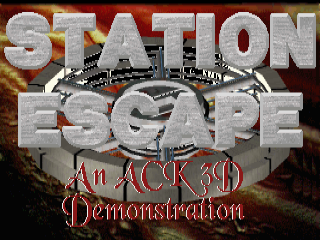