You can play Super Fighter on this website so you don't need to download and install the game on your computer. We recommend to use Google Chrome when playing DOS games online.

This is a liberated game: it was originally commercial, but Super Fighter Team released the full version as freeware. There are several releases:

A pre-release test version called The King of Super Fighters is also available.

For game controls, please refer to this page.

NOTE: This game has an updated Windows version, which is available from the official site (please see the links section below).

A mysterious crime syndicate launches a series of political assassinations across the globe in a bid for world domination. Eight heroes, each skilled in martial arts, accept the challenge of facing the top three villains of the drug cartel in one-on-one fights to put an end to this threat.

Super Fighter is a fighting game in the same tradition as Street Fighter and The King of Fighters. The player selects one of eight characters and engages in a series of on-on-one battles. Each character has a unique set of moves and special abilities, and the main objective is to defeat all other opponents and eventually face the end boss.

Super Fighter was released as Fatal Encounter in Australia and Street Counter in South Korea. 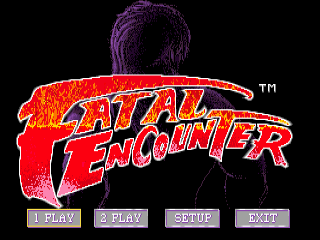