You can play Super Roco Bros. on this website so you don't need to download and install the game on your computer. We recommend to use Google Chrome when playing DOS games online.

Super Roco Bros. is a side-scrolling platform game that appears to be inspired by Super Mario Bros., but is only superficially similar to it in terms of gameplay. You control Roco Roco, a hot dog chef who sets out to search for his brother Pepe Roco in bizarre worlds populated by odd, but somehow cute cartoonish creatures.

The objective of each level is to reach the exit while collecting gold coins and avoiding or dispatching of monsters and other threats. Monsters are destroyed by jumping on top of them, while any other contact is harmful to Roco Roco. There appear to be no other forms of attack for the player nor powerups or destructible blocks with extras, which could be expected from a Mario clone (like Akiko and Minami). However, the game plays very smoothly and is pretty challenging.

Super Roco Bros. was sold as shareware, with the unregistered version allowing to play four levels out of 16 in the full release. The game was created with the DIV Games Studio suite. 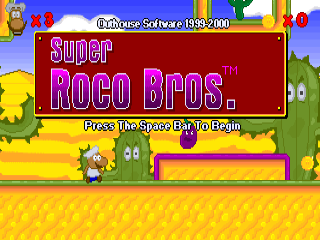