You can play Super Street Fighter II Turbo on this website so you don't need to download and install the game on your computer. We recommend to use Google Chrome when playing DOS games online.

GEAR UP FOR TRUE ARCADE ACTION!

A new phase in the legendary rivalry of the World Warriors has begun. Newcomers - Cammy, Dee Jay, Hawk and Fei Long have joined the ranks of the Street Fighters in the hopes of becoming the ultimate martial arts champion.

But there is another....

An ancient foe named Akuma has surfaced to crush the battle hardened Street Fighters. His power knows few limitations and he has the ability to retire the World Warriors—permanently.

There is hope for the heroes, however, as they have prepared for Akuma's arrival by learning new moves and techniques to combat this deadly new enemy. These new abilities add enough firepower to the mighty cast of characters to make even Akuma realize that he too is in for the fight of his life!

This incredible arcade classic challenges your fighting skills with all new offensive and defensive capabilities for every player! Do you have what it takes to battle your way through a world of opposition? The only way you'll ever know is to dare to play! 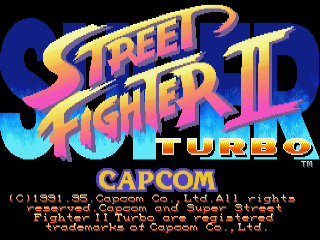