Swing (also known as Marble Madness) is a tile-matching game somewhat similar to Columns, but with a bit of physics thrown in. The playing field is slowly filled in with coloured marbles that fall from the top of the screen in places chosen by the player. The objective is to place at least three marbles of the same colour next to each other horizontally, which triggers a reaction that removes this connected line, as well as any other marbles of the same colour that were touching any of the initial three. However, placing three or more marbles vertically does not trigger a similar reaction (unlike Columns).

The tricky part is that at the bottom of the screen, there are several weighing scales of sorts that the marbles fall upon, and each marble has a weight indicated by a number. Dropping more or heavier marbles on one side of the scales will move it lower, and the other side will move accordingly higher, shifting the playing field. A very heavy marble dropped against a very light one will send the latter flying, possibly out of the playing field altogether. These are rewarded with bonus items.

The game is not easy to master but will provide an interesting challenge for all puzzle lovers. 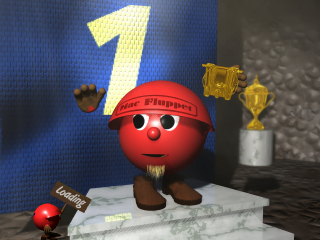